Cixin Liu takes the tropes of science fiction and looks at them with new eyes in this ambitious and imaginative series. 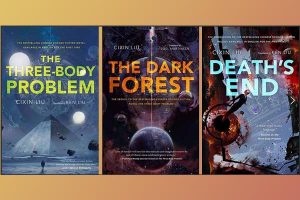 ‘Hard’ science fiction doesn’t have to be hard to read, and even though Cixin Liu admits The Three-Body Problem is more about ideas than character, it is quite easy to be drawn along by the compelling narrative and astounding concepts.

In fact, the tantalising ideas and boundless landscape have garnered The Three-Body Problem some very famous tech-savvy devotees, including Barack Obama, Elon Musk and Mark Zuckerberg.

The former US president praised its immense scope and, from his unique perspective, found it great fun to read – because his own problems at the time with national security paled into insignificance in the face of the world’s impending annihilation.

The trilogy is properly titled Remembrance of Earth’s Past, although in the West it is often referred to it as The Three-Body Problem series. (Just as we tend to call the author Cixin Liu, though he would more properly be called Liu Cixin, with his family name first.)

The third and final book, Death’s End, was released recently in English and has been nominated for a highly coveted Hugo Award – won by the first book in the series in 2015.

Increasingly through the series, you feel like a smaller and smaller speck in an almost incomprehensibly vast universe. One of Liu’s great skills is being able to realistically describe and explain the immensely large and the infinitesimally small. This is the foundation of his imaginative vision that sees humans face numerous hostile alien forces and ultimately journey to the end of time.

No story can have greater scope. Yet, at each crucial stage, it is a single human who must face their own doubt and find the emotional and intellectual resolve needed to save Earth. Even the characters who act treacherously are bound by an ideology that is attempting to save a version of Earth – however, some of those versions won’t include humans.

The first book, The Three-Body Problem, starts with Ye Wenjie. As a young girl during the Cultural Revolution, Ye witnesses her scientist father beaten to death by zealous schoolgirls while her sister, who had betrayed him, is killed and hung from a wall. Later, when Ye refuses to falsely accuse her dead father, she is beaten, starved, and left to die in a cold wet cell.

It’s no wonder she started to give up on the human race, and came to the belief that we could not cure ourselves of evil:

As she continued to mull over these thoughts, a deduction made her shudder: Is it possible that the relationship between humanity and evil is similar to the relationship between the ocean and an iceberg floating on its surface? Both the ocean and the iceberg are made of the same material. That the iceberg seems separate is only because it is in a different form. In reality, it is but part of the vast ocean …

Ye’s experience in astrophysics saves her and she is put to work in a secret communications centre called the Red Coast Base, where she develops a way to send messages further than ever before by using the core of the sun as an amplifier. She sends a message into the universe and, four years later, receives a reply. But hers was not an act of discovery; it was an act of defiance and betrayal.

Her story is interspersed with that of Wang Miao, 40 years after the Red Coast Base incidents. He is a nanotechnologist enlisted by rugged cop Da Shi to help solve a spate of murders of elite scientists. Accepted as a member of a secretive society of physicists, Wang discovers the other members play an online immersive virtual reality game called Three Body, where the avatars of players must try to understand and develop solutions to the ‘three body problem’ associated with predicting the movement of three suns orbiting each other. The game is set on a planet which is periodically destroyed by the suns either moving too far away or getting too close. The inhabitants are called Trisolarans, named after the three suns.

Wang learns the game had been developed by Ye Wenjie and is a representation of the real world she has been communicating with. The Trisolarans are coming and they’re not on a peace mission.

Trisolaris is four light years away and with their current technology their journey will take 400 years. Wang, the security forces and the scientific community work to combat the threat, taking into account the centuries-long timeframe, while battling the mysterious ETO – the Earth-Trisolaris Organisation – that welcomes being taken over and even destroyed by the aliens.

Adopting a quasi-religious philosophy, the ETO calls the Trisolarans ‘our Lord’, and their plan of action is as follows:

There are further technological developments from the Trisolarans, including the highly imaginative concept of the sophon, a weapon utilising multidimensional deconstruction and quantum entanglement. While these concepts sound complicated, they are explained clearly and in a visually enthralling manner.

Part of the credit for this in the first book must go to translator Ken Liu, the unrelated award-winning American science-fiction writer. He has managed to create an English version that maintains the nuances and cadences of the Chinese language so that it is simultaneously exotic and relatable. He provides ample footnotes to help us through many historical and social Chinese references.

Ken Liu also translated the third book, Death’s End, while the second, The Dark Forest, was translated by Joel Martinson.

As the series progresses, Cixin Liu’s vision of the interactions between humans and the other inhabitants of the universe grows ever more ambitious and imaginative – but always anchored by a relentlessly rational scientific foundation.

One of the intellectually engaging aspects of the series that also drives the overarching narrative is the way Liu takes the tropes of science fiction – such as light-speed travel – and looks at them with new eyes, considering the smallest details and the greatest consequences. Higher-dimensional existence is another amazingly visual element explored in the second book.

To some readers this might sound nerdy and unapproachable, but in China it has become one of the most popular science-fiction series ever, with a Chinese-language movie already in production.

And as the books are rapidly gaining a Western audience, so too may the movie, although we will probably have to wait for a Hollywood English-language remake (with a facially doctored Scarlett Johansson, perhaps) before it achieves a general release.