[This story first appeared in the Sunday Telegraph.]

OUR whole family loves music, the north coast and the great outdoors, so it seemed a brilliant idea to combine all three and take a campervan trip to the Bellingen Global Festival. 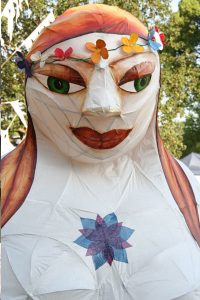 We thought back to the days of Sunbury and Woodstock, and planned for copious helpings of peace and love, but hopefully without the mud and the mayhem. We hired a campervan, threw some surfboards on top, loaded up the teenage boys and headed off on a surf-safari-cum-musical-road-trip.

The Eco campervan was an all-inclusive package – a double mattress in the back, as well as a tent, annex, kitchen equipment, lamps, cooker, cutlery, eskies – pretty much everything you need. It was even iPod-ready, so we could listen to our road trip playlist as we cruised along the highway.

We found ourselves a cosy camping ground by the Bellinger River where it curls into the sleepy seaside town of Urunga. We unpacked the tent which, as promised, took only two minutes to erect. Unfortunately, in the fading light, it took us considerably longer to get to grips with the annex. It was supposed to be roughly rectangular, but ours looked more like a canvas Opera House. The effort had famished the boys, so we gave away any idea of setting up the kitchen, and took the easy option of the local Chinese takeaway, together with a bottle of white from the very nearby pub.

If we didn’t feel inadequate campers before, we certainly did when we returned with our food. In that short space of time, a convoy of West Australians had set up a small canvas village, cooked a meal and were feeding a horde of pyjama-clad children.

That night, as we lay our weary heads on our surprisingly comfortable self-inflating mattresses, we realised it wasn’t such a sleepy town after all, and it wasn’t such a good idea to camp right opposite the pub. Yes, it was karaoke night, and the thin tent walls couldn’t shield us from endless, flat versions of Sweet Home Alabama, American Pie and the seemingly interminable Hey Jude.

In the morning, we staggered from the tent to see the West Australians already de-camped, breakfasted and moving out. In the light of day, we could see where we’d made mistakes with the tent, and quickly sorted it out. But with the off-key pub voices still ringing in our ears, we were determined to move quickly to Bellingen and hear some real music.

As we approached the town, it was already clear something special was underway. We joined hundreds of people of all ages streaming towards the showground, where musicians from around the world gathered in a vibrant celebration, infused with a peaceful new age ambiance.

The atmosphere was best summed up by headliner Bob Brozman: “This is not a concert,” he said. “It’s just friends having a good time.”

Virtuoso slide, blues and folk guitarist Brozman was one of the drawcards for us, and we were spellbound as teased a thousand sounds from his amazing range of guitars. His most impressive instrument was a hybrid sitar/guitar with a staggering 22 strings, which he seemed to turn into an entire orchestra.

There were many other musical highlights, including the beautiful Noriko Tadano who made the shamisen (traditional Japanese banjo) perform tricks you’d better expect from Jimmy Page. Accompanied by husband Toshi Sakamoto on the Japanese waidako drums, she managed to express tender emotions with soaring vocals, thrilling riffs and muscular rhythms. At one stage, Tadano put down the shimasen and joined Sakamoto on the drums – making for a heart-stopping experience.

We caught as many acts as we could, including the Wanampi Dance Performance, the ethereal voice of Inga Lillestrom, the soulful Archie Roach and the dynamic flamenco of the Arrebatto Ensemble. But you didn’t need to find a stage to listen to music – everywhere we went, we were surrounded by it. Every few metres you’d stumble upon another didge player, a group of enthusiastic bongo drummers, or a ramshackle gypsy accordion band. Some were busking, but most were just threw themselves into the experience of playing with musos from as far away as Africa, Tibet and the Caribbean, while revellers spontaneously danced, twirled and sang along.

But the Global Carnival isn’t just about music – there was also the clothing, art and, of course, food. We enjoyed the best Jamaican fish we’ve ever had, and couldn’t resist little tastes from Guatemala and Mexico on the way.

Although our kids were mainly interested in the music, there was also an entire children’s festival running alongside the adult extravaganza, including traditional story-telling, African shadow puppetry, acrobatic clowns and even a musician who “played” a bicycle. The kids took part in a mosaic tile workshop, with the tiled patterns to end up as a permanent bench in the showground.

By far the most impressive artistic aspect of the festival was the lantern workshop – and the resultant lantern parade at sunset, when all manner of amazing creatures from lions and eagles to Mother Earth herself were hoisted high and paraded around the showground in a beautiful and touching finale to the most peaceful festival of the year.