[This story was syndicated in News Corp newspapers.]

WHEN we were just a twosome, my wife and I travelled on a whim, wandering Grecian ruins or forging Sulawesi jungles at a moment’s notice.

But once kids arrived, it all seemed too hard, too risky and too expensive. 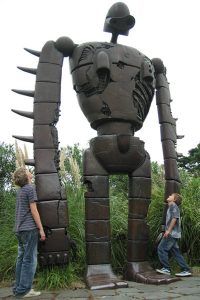 The imaginative wonder of Studio Ghibli

Eleven years after the last addition to the family, we decided we’d had enough staying at home. We cashed in our frequent flyer points and headed to a country that was safe for kids and relatively inexpensive: Japan.

At first we were concerned the land of the rising yen may sap our savings in a matter of hours. But thanks to a strong Aussie dollar and a lot of time spent Googling accommodation, the whole trip ended up quite reasonably priced.

The key is to pre-book transport and accommodation. We went for the low-cost, culture-rich experience of the traditional Japanese ryokan: all four of us shared the one sleeping space on tatami mats, with futon mattresses folded up and packed away during the day.

In most places we also got yakata pyjamas and special indoor socks to scoot about the polished floors.

We bought four Japan Rail (JR) passes – the only way you can acquire them is to buy them from an agent before you leave. While expensive (currently about $630 each for adults for two weeks; half price for children five to 11), they saved us money in the long run and gave us the freedom to go wherever we pleased.

The further you intend to travel, the better the value. Not only do the passes cover all the JR trains, they also cover most bullet-fast shinkansens, as well as the urban networks.

With boys aged 14 and 11, fun had to be high on the agenda – but we also wanted a cultural experience. So we ditched Tokyo Disney for the more magical Studio Ghibli, creative home of master animator Hayao Miyazaki (creator of Spirited Away, among other anime classics).

You need to book well in advance because numbers are strictly limited, but this means virtually no queuing, no cranky kids and a smiling, keen staff. It’s more art museum than theme park, but the spirit of joyful imagination was infectious.

Breakfast was an adventure each morning as we came face-to-face with nato (the mucus-like beans that cling to your face), succulent fish, marinated poultry, mountain roots, wagyu beef cooked on miso-encrusted magnolia leaves, pickled vegetables, miso soup and green tea.

Our best-remembered dinner was at the Umenohana restaurant in Harajuku: a miraculous 12-course banquet of tofu cooked in a dozen different, delicious ways. Before we left Sydney, I doubt the boys would have eaten even one tofu dish.

The onsen culture of public bathing was more shock than adventure for the kids and, even taking into account the incredible land of Spa World, was something they want to remember, rather than repeat.

To experience the famously contrasting Japanese culture, we first took a big dose of the ultra-modern. Sometimes bewildering, always fascinating, Tokyo was the perfect initiation into international travel.

Every minute had the boys wondering, learning and being drawn into the amazing techno world where commuters are too polite to talk on their mobiles, so they watch TV on them, instead; where even the toilets have inbuilt computers and music systems; and where everything is so neat you see cleaners scurrying to pick up a single grain of rice off the street.

We spent plenty of time on the labyrinthine Tokyo rail system, hopping off to watch the pretty punks of Takeshita-dori wander past, the haute couture of Omotosando, and to take a leisurely cruise down the Sumida River.

Next we headed for the different experience of the mountains, staying in a very traditional ryokan in Hirayu Onsen, a thermal spa town deep in the Japanese alps.

The septuagenarian staff looked as if they’d never seen foreigners before – and maybe they hadn’t. Certainly, the appearance of two blond boys had our personal attendant all agog; we dubbed her Super Granny for the way she talked incessantly, worked non-stop and kept rubbing the lads’ hair.

It was an ideal base to head deeper into the oak- and elm-clad mountains.

The longest cable car in Japan took us from Shinhotaka, thousands of metres up through the clouds to a pristine forest, where we enjoyed an alpine bushwalk and a soak in a riverside onsen.

On to the south, following languid river valleys to the Muromachi period town of Takayama, famous for its twice-yearly festival where teams of men pulled brightly coloured floats through town. Each three-storey float, called a yati, features a large, dancing marionette which represents an ancient Shinto deity.

The show continues long into the night, when the 500-year-old yati are paraded across the bridges, bedecked in bright lanterns and buoyed by the songs of schoolchildren.

The boys loved it. But culture, like health food, should be offered in small doses.

When we reached Kyoto, they discovered it was home to more than 100 significant historic temples. Their joint spontaneous groan of “great” was heavy with sarcasm.

Stuff history, we decided, let’s search out some fun. So we took a 20-minute shinkansen train ride to the amazing Spa World in Osaka: 16 themed onsen in opulent luxury, including such thrills as a spa where sharks swim underneath your bare backside (and a sheet of safety glass); and Dr Fish, where hundreds of the tiny creatures eat away the dead skin on your feet while you enjoy a cup of tea.

Best of all, on the roof of the complex is a giant water park complete with frighteningly fast waterslides, swirling funnels and exhilarating half-pipe rides.

Satisfied, the boys followed us as we shopped for ceramics and finely patterned cloth in the ancient Gion area of Kyoto.