[This story first appeared in the News Limited Sundays]

My sister had once stayed in a Roman convent and extolled its virtues: cheap, atmospheric and convenient. 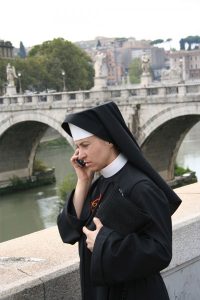 Rome is an intriguing blend of ancient and modern

So when I found myself heading for a mini stopover in Rome, it seemed the perfect way to become immediately immersed in one of the seminal, if not seminary, aspects of Roman life: the Church.

There are a number of Roman convents offering accommodation, varying considerably in price, curfews and level of austerity. Being a Catholic is not a pre-requisite (although unmarried couples are sometimes requested to stay in separate rooms). Some are close to the Vatican, some attached to churches, some have the inbuilt atmosphere of being woken not by the buzz of an alarm, but by the chanting of Matins hymns.

I chose the Domus Sessoriana, not a convent but a Benedictine monastery which has offered accommodation to pilgrims since the 11th century. It is attached to the Basilica Santa Croce, which has been variously a third century imperial palace, home to Constantine’s mother (St Helena) and in the fourth century became one of the first churches in Rome.

I anticipated a bed of slatted timber with a wooden pillow, up at dawn for matins and a breakfast of unleavened bread and water. I was in for a shock. There was a modest but neat foyer, complete with concierge, and after wandering the labyrinthine corridors I eventually came to my air-conditioned room which included cable TV and a mini-bar. Nothing too fancy, but everything you need.

In the morning I took the glass elevator to the ground floor, enjoying the art-show as I did. The lift-well is graced with the mesmerising 19th century biblical artworks of Pierre Lehoux, depicting the lives of saints and the powers of the archangels.

Going into the Basilica I immediately stumbled upon a mass service – something hard to avoid on a Roman Sunday. This was a joyful experience, with all the senses overwhelmed as the congregation held hands and sang without care, surrounded by the scent of white roses and white carnations, under the sun-strobed dome of the ancient basilica. It was a very family and community service, with a local gathering varying from stylish young men and women to relaxed children who talked quietly, sang and read books. But by the end I had a sore neck from craning at the amazing 15th century ceiling mosaics and frescoes, depicting the triumph of good over evil and the finding of the cross by St Helena.

An attached chapel houses relics and artworks. There stands a painfully realistic crucifix that makes Mel Gibson’s movie look tame, while on display are the relics including wood, a nail and the nameplate from the cross and – of all things – Saint Thomas’s finger. These were brought from Jerusalem by St Helena, together with the Israeli soil which lays under the 12th century ornate tiling.

The number 3 tram runs right past the basilica, the perfect way to take in the Roman sites. For a few euros, a transport pass allows you to hop on and off trams, buses and the metro as many times as you like. My first stop was at the cathedral of San Giovanni. Of course, mass was being celebrated – but a more grand variety than at Santa Croce. The Giovanni nave is guarded by towering statues which look like Roman gods, converted to Christianity and given saints names so as not to waste the marble.

Outside, as seemingly outside every church in Rome, gypsies asked for money. Some perform for their fee, especially children who dance to an accompanying accordion.

The next stop was the Colosseum, where I met up with a walking tour guide I had booked on the internet before I left. Normally they cancel the tours if there are less than five people, but they let us go ahead even though there were only two Americans and myself. The Imperial Avenue is closed to traffic on a Sunday, so you can stroll through the entire historic quarter without fear of being run down by a casual Roman driver.

Serena, our guide, was entertaining and knowledgeable. She actually has a masters in archaeology, and was only moonlighting as a guide while waiting for her next archaeological dig.

Digging is something Romans find hard, she told us. Every-time they begin work on a new building site, they come across some ancient ruin and have to halt while it is excavated. No doubt that’s why this amazing city is only seven stories high, and interwoven at every corner with ruins dating back before Christ.

The 571 bus then took me to the Vatican to wander through St Peters, including a climb to the top, ascending the dizzying spiral staircase inside the walls of the dome, coming out at the summit to the best view possible of the Vatican and the surrounding cityscape.

Next door is the Vatican museum which features the most brilliant artwork in Christendom by Michelangelo, Raphael, Botticelli et al, including of course, the Sistine Chapel.

At the end of the experience my eyes suffered artistic overload. They wept from absorbing so much beauty in such a short space of time, through staring at the dazzling images from some of the greatest imaginations of the Renaissance.

But I couldn’t resist one last lingering look at a stunning glass painting of the Madonna and child. It was hard not to look beyond the religious significance to the artistic process itself. The model looked the spitting image of the actress Kate Hudson, though she was painted in the 16th century.

Nowadays beautiful women desire immortality on the big screen. In those days it was on the canvas, glass or plaster, courtesy of the great masters. Just like Rome itself. A beautiful city, immortalised by thousands of years of artistic and architectural genius.