Surf’s up in Samoa

[This story first appeared in The Australian] 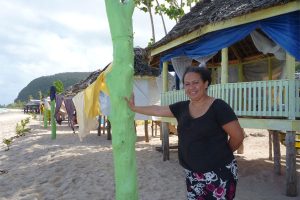 WE arrive at Apia airport and cut across the main island of Upolu, travelling for about 40 minutes along narrow, jungle-lined roads to the Sa’Moana Resort on the south coast.

It’s a smoky Sunday morning. All along the roadside, small boys tend fizzing black logs, manufacturing coke for the umu, the post-church feast that occupies most of the day.

They take the Sabbath seriously here, and there are strict rules: no wandering through villages, no working, no surfing. It slows down the already ambling pace of Samoan life to a snooze.

But we don’t mind; the relaxed pace is what has drawn us here for what could be our last overseas family holiday — already our elder teenage boy, Jack, has become swamped by his busy tertiary lifestyle, and his younger brother David isn’t far behind.

We want a holiday free of television, videos and Facebook. We want surfing, diving, kayaking and lazing under coconut trees. And, as it turns out, church.

The Sa’Moana Resort features airy and unpretentious fales, and we sleep easily to the comforting churn of the sea. The resort, co-owned and run by Aussie surfer Paul Robertson, is right on the beach, near the small village of Salamumu. The two are intrinsically linked — the resort land is leased from one of the village families, and all the friendly local workers are Salamumuans.

On Sundays, guests are invited to the village’s Methodist service and, despite it being entirely in the Samoan language, it is an enriching experience.

The singing is mesmerising and so too is the appearance of the congregation. Men wear debonair cream three-piece suits; women are dressed in impossibly intricate gowns and hats embroidered with white flowers.

We are spotted by an impeccably dressed older lady who’s obviously an important person in the church. With a flick of her head she gives an instruction and a prayerbook is whisked away from a young woman and brought to us. We are guided through the hymns, all in tongue-twisting Samoan. Our singing would find a spot on the Australian Idol exit reel, but we are roundly congratulated for trying.

During our week’s holiday we visit the former home of Robert Louis Stevenson, who spent the last chapter of his life in Samoa; slip and bump down the Sliding Rocks into sparkling natural pools; enjoy the dancing and feasting of a fiafia celebration; and watch kids playing kirikiti, the colourful Samoan version of cricket. We even enjoy the thrills of a rugby match between two villages, complete with sapling posts, a barefoot fullback and a linesman using a tree branch as a flag.

But the reef is the main source of entertainment. For the kids, it’s surfing. There is a sweet right-hand break exactly out the front, another lefthander at the village about 1km away, and several other bigger breaks a short drive away, including Boulders and the ominously named Skin Grafts.

All the breaks have one thing in common — they are straight on to coral in relatively shallow water. It’s great surfing, as long as you don’t fall off. Unfortunately, that’s my only trick, so I stick to snorkelling with my wife, Lynda, while the boys paddle out each dawn with the resort-supplied instructor, Trent from Sydney.

The unpatrolled surf spots aren’t the soft-sand beach breaks we are used to in Sydney, so we’re grateful to have Trent on hand. As the week draws on, more surfers turn up, including Corey from New Zealand, Dan from California and Occy from Brazil. Our boys form a bond with this international coterie and start a pan-Pacific competition around the pool table, occasionally including the off-duty Salamumuans.

While the boys enjoy their time above the waves, we experience some of the best snorkelling on the island. Again, it’s right out front — as easy as strapping on some fins and splashing into the sea. The coral is good but the sea life is better. The reef is filled with massive schools of bright fish — from the ubiquitous parrot fish to the tiny, electric blue damsel fish — as well as enormous sea slugs, starfish and anemones.

Ten minutes’ walk from the beach is another small lagoon that is out of bounds, as the popular Survivor television show is being filmed; the jungle paths have been strewn with barbed wire, no doubt to ensure no one smuggles chocolate to the contestants.

But as much as Samoa is tropical paradise, the island nation has had more than its share of hardship and suffering. In 2009, a powerful tsunami washed away almost 200 people and destroyed villages and resorts. Sa’Moana was left relatively unscathed, but other nearby resorts suffered loss of life and the eastern tip of the island was devastated. Robertson says Sa’Moana lost a pool pump, some furniture and a boat.

“I feel humbled and embarrassed that we got off so lightly, compared to some of my friends who lost everything, including family members,” he says.

Following the tsunami, Robertson went to Australia to help spruik the Samoan tourism industry. Bookings across Upolu had dropped off because people were worried about more tsunamis and concerned the infrastructure had been wiped out. In fact, the north of the island was relatively unaffected and many resorts in the south were rapidly rebuilt.

For a day trip, we venture east to Lalomanu, on the eastern tip of Upolu, about an hour along the picturesque southern coast from Sa’Moana; it’s one of the most beautiful parts of the island, but also one that bore the brunt of the tsunami. There we meet Mepa Apelu and other members of her family at the Taufua Beach Fales, which was washed away in 2009, with terrible loss of life. Understandably, she doesn’t want to talk about that day, but she is proud of the determination her family showed to get the resort back up and running. “The tsunami hit us in September,” she says.

“We managed to finish the restaurant by November. Then we started building one fale after another. By December we had 16 fales here, and then we built another six just down the beach for our cousins.”

The resort is popular with backpackers from Australasia, Europe and South America, as well as more mainstream tourists looking for a simple, traditional Samoan experience. The landscape is breathtakingly beautiful, although there are occasional reminders of the disaster, such as the empty shells of buildings being reclaimed by the jungle.

Locals say the government didn’t help as much or as quickly as many people hoped it would, and there is a political controversy in Samoa about where all the relief funds went. But Apelu is philosophical. “I don’t have any animosity towards the government. People in Samoa are taught that you survive on your own; you don’t rely on others. If the tsunami taught me one thing, it’s that life is short, so appreciate each other, work together. Live it simple and live it up.”