BECKY CHAMBERS The Long Way to a Small

Becky Chambers assembles an intriguing cast of species in a spacecraft on a mission into deep space. 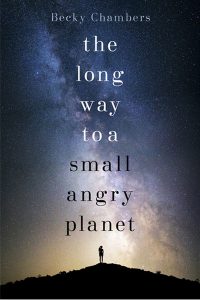 Compared in its publicity to cult TV sci-fi show Firefly, The Long Way to a Small Angry Planet is both more and less than that cowboy western in space. The strengths of Firefly are its solidly grounded world-building – no robots, no aliens, just post-civil-war settlers on terraformed planets – and its inventive, relatable and intriguing characters.

Chambers’s broader setting is the Galactic Commons, a Star Trek-style confederacy peopled by beings of all shapes and sizes, as well as sentient artificial intelligences (AIs). The closer setting is the Wayfarer, a time-warp drilling ship that is crewed by a ragtag bunch of scallywags much like those in the Firefly series – in fact, some of them could have jumped ship from the Serenity.

But Chambers’s world-building is far more diverse, and the Wayfarer’s crew includes humans, a six-legged grum, a dwarf, a reptilian Aandrisk, a sentient AI and a sianat visionary navigator.

Two of the perennial questions in intergalactic science fiction are how to travel the vastness of space in a time that enables a good story to be told, and how to render the way the creatures of other worlds look, feel and act. The answer to the first question is ably handled, while the second makes for the most entertaining aspects of the story.

Chambers seems to have borrowed a concept from Dune to overcome one problem with travelling at light speed. One of the issues with travelling so fast is that even a tiny speck of dust could rip through the steel hull. As in Dune, this eventuality is overcome by prescient creatures able to see into the future in detail and plot a course avoiding all obstacles.

In Dune it was the spice-affected guild navigators who plotted the safe passage of ships. In this book, it is sianat pairs. In childhood, sianats are infected with a virus called the Whisperer, which alters their brain function to enable them to intuitively understand the multi-dimensional nature of space. Once infected, the host and virus are collectively referred to as a sianat pair.

A sianat navigates a tunnelling ship through subspace to bore wormholes in the fabric of time-space, after which other ships can follow unimpeded. The Wayfarer is a small-scale tunnelling ship, but the captain, Ashby, has accepted a job at the limit of the ship’s capability in the hope of a huge payday.

The trip is to Hedra Ka, a distant planet inhabited by a hostile people recently brought into the Galactic Commons. To make the journey Ashby needs a ship’s clerk who can speak the various languages and understand the customs of the people they meet on the way, and so he hires Rosemary Harper, a Martian-born human. But she is running from her own problematic past and is bluffing her way through.

While the set-up is enticing, there is perhaps a little bit too much problem-solving via reason and paperwork for it to be a truly exciting space opera – but it has its moments, from pirates and saboteurs to resisting the galactic police.

The most interesting aspect of the book though, is the litany of otherworldly characters.

In many science fiction universes (notably 20th-century television shows) the non-human creatures all seem to resemble humans in prosthetic suits or funny ears. Not so in the Galactic Commons. For example the ship’s doctor is a grum – a race of large multi-limbed creatures with a tragic history:

‘Our species are very different from one another. You have two hands, I have six. You sleep in a bed, I sleep in a tub. You like mek, I don’t. Many little differences. But there’s one big thing that Grum and Humans have in common, and this is our capacity for cruelty. Not that we’re bad at the core. I think both of our species have good intentions. But when left to our passions, we have it within ourselves to do despicable things.’

The most extreme example of physical difference lies with the Harmagians – boneless, mollusc-like blobs with yellow skin, eye stalks, and chin tendrils that curl when they’re happy. Despite their appearance they are the most advanced creatures in the galaxy. Unsurprisingly, other species are not readily attracted to them sexually.

But interspecies sex does occur. Notably the forbidden relationship between the human Ashby and his Aeluon lover, and between Sissix, the female reptilian Aandrisk and her human female lover.

All at once a flood of Aandrisks came pouring out of the open entryways. There were a dozen of them, maybe more. Rosemary hadn’t had time to count before they piled on top of Sissix, who had gone running to meet them. They tumbled down in a tangle of tails and feathered heads, hugging and squeezing and cuddling close. All their attention was focused on their long-absent daughter. They nuzzled her cheeks, tugged her feathers, pressed as close to her as they could. Rosemary was taken aback. Even though there was nothing overtly sexual in the way they were touching each other, Rosemary had trouble seeing a mass of writhing naked people any other way. It looked more like group foreplay than a family reunion.

But perhaps the most unusual relationship of all is between the AI, Lovey, and the dwarf technician Jenks, to the point where they even consider eloping – a difficult task as she is embedded in the ship’s IT framework. It could be possible if she migrated to a body kit – but those are illegal. However, unknown to her, Jenks has smuggled one on board.

Chambers followed an interesting path to publication. The progeny of rocket scientists and aerospace engineers, she had a desire to write science-based fiction, but stalled. Estimating she needed $2500 dollars to continue writing, she started a crowdfunding campaign on Kickstarter. She got the money, finished the book and self-published it before finding an agent and a publisher. It was shortlisted for the Arthur C Clarke Award, nominated for the British Fantasy Awards Best Newcomer Award and was a finalist in the Kitschies.

She has since written two more books in the Wayfarer series.