Underground Airlines is set in modern day USA – basically the same except for one overwhelming difference: the Civil War never happened, and slavery still exists.

This novel is quite a feat.Ben H Winters has woven a provocative idea into a compelling narrative, driven fast and hard by a deeply conflicted protagonist. 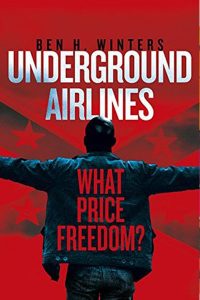 Alternative histories may not be new, but Winters has made his high-concept novel highly readable as well thought-provoking. He is standing on the shoulders of writers like Philip K Dick, whose The Man in the High Castle was set in a world where the Allies had lost the war and America was split between the Japanese and the Nazis.

The tilting point in Winters’s alternative history is having the assassination of Abraham Lincoln occurring just before the Civil War is about to commence. This sets in motion a series of compromise amendments in Congress that avoids war while enabling slavery to remain in those states that have it in place – all bound by a final 18th Amendment forbidding these amendments ever be changed.

In this landscape we meet Victor, an escaped slave who has been railroaded by the US Marshal’s office to help track down other slaves who’ve made it out of the Hard Four (Alabama, Carolina, Louisiana and Mississippi) so they can be returned to their ‘rightful owners’.

Victor has been very successful as an undercover bounty hunter, burdened by the threat that if he falters he will be sent back South himself. He professes a lack of concern for the slaves he recaptures, and takes a cynical Marlowesque line as narrator, replete with the use of colourful metaphor. But how far would you have to chip through his tough exterior to find a haunted soul?

At one point he recalls recapturing a nameless slave hiding in a child’s treehouse in some unremembered northern city:

That slave, whatever his name was, never knew what happened to him. I spotted a candy wrapper, fluttering down from that tree like a shining silver leaf, and I took pictures of him up there with a telephoto lens and put the pictures on the secure server, and Mr. Bridge made his calls. I never even got out of my car.

But before long, the mask slips:

I do it even now, you see? I play false, I dance and dance. I murmur the stories in shadow or half-shadow; I pretend to myself that I don’t remember the names, the details, when in fact I do. I did and I do – I remember all their names.

His latest case is tracking down a runaway PB (person bound to labour) with the slave-name of Jackdaw, reportedly hiding in Indianapolis. Victor checks into the aptly named Crossroads Hotel, perhaps a reference to Robert Johnson’s famous midnight meeting with the devil; certainly a forewarning of an impending, crucial decision.

There he meets Martha, a white woman with a black child, and while he tries to avoid any attachment, their lives become intertwined, especially after she helps him sneak across the border into Tennessee.

They are after a parcel left behind by Jackdaw which, if found, may sound the death knell for slavery. Victor has his own ideas, believing nothing will destroy the system, but he might be able to trade the parcel for his own freedom. But to find the evidence he must journey into the heart of the beast.

This leads him to the giant cotton growing and manufacturing centre of Garments of the Greater South Industries, or GGSI, a vast enterprise with a GDP bigger than Rhode Island. The tension ratchets up as he slips into the slave population to continue his investigations:

The men were shirtless and shoeless, as I was, and were facing away from me, just backs and heads, rows and rows of backs and heads, hundreds of men standing totally still, their voices raised.

‘These strong hands belong to you,’ they sang in chorus. ‘Hands and back and spirit, too.’ The melody was simple, a childish four-note singsong.

‘Every day in all I do –’ I shouldered my way forward, finding a spot in the crowd – ‘GGSI, my heart is true.’

They sang – we sang – with no enthusiasm or joy. We used to sing at Bell’s, crossing the yard or working on the pile, just sly lyrics, silly lyrics, yearning for freedom or roasting Massa in nonsense words he couldn’t understand. This, though – this was a different kind of singing. I looked from man to man, and they were singing mechanically, eyes front, mouths moving like puppets. Singing this dumb refrain about how much they loved their bosses and loved their work.

The new America has echoes of current American society, especially in the way the north navigates through legislated racism. In a patrol car with Cook, a black Indianapolis cop, Victor watches as the officer warns a young black man to keep his face uncovered:

‘Better he gets a warning from me than have one of these crackers roll up on him … Peele’d knock that kid’s head off, hoodie and all, put handcuffs on the corpse. That’s resisting arrest, no fucking joke.’

There is also a resonance with the refugee crisis, through the hardships endured by the escapees, the logistics of their removal and the risks taken by those who help them. As with the current refugees, particularly in Europe, corpses are found in containers and packages, the results of failed escape attempts.

Winters was praised for his previous work, the award-winning The Last Policeman trilogy, and has also won acclaim for this book.

However, there has also been some controversy surrounding Underground Airlines – especially how he was commended as ‘brave’ and ‘fearless’ when writing from a black point of view, given that he has the benefit of a white background and all that entails. Similarly, there have been criticisms of his appropriation of a black voice, which some see as exploitative, and say this book should have been written by a person of colour; but that seems a moot argument. Winters wrote it, no one else. Yet, the question lingers whether African-American writers have had the same opportunities to write a book like this.

The other side of the argument is that if writers can only create characters like themselves, with their own cultural voice, creative literature will suffocate. If Winters wrote in a voice closer to his own, Victor would have been white and as a character would have had smaller stakes in the story. Also, some critics would then question why the protagonist wasn’t African-American.

This would be a further irony, as in his narrative Victor describes ‘mockingbirding’, a tendency in ‘worthy’ literature for a black person to be saved by the ‘real’ hero – a white man.

In interviews Winters has said he is aware of the disparity of privilege gained by his white background – especially in the very ‘white’ publishing industry. But he stands by the book, even while he says more can be done and should be done to enable more people of colour to be published. He says he is using the tools of the detective/mystery genre to illuminate the horror of slavery and contemporary racism, and that the subject of slavery was integral to investigating these ideas and was not simply chosen for entertainment value.

The discussion around his novel has led to earlier, more ‘authentic’ speculative fiction takes on slavery gaining renewed exposure, such as Kindred – the popular 1979 novel by African-American author Octavia E Butler, and Ralph Ellison’s Invisible Man. It is worth noting that both of these books have been cited by Winters as influences and inspirations.

Even as those issues are considered, the narrative sweeps the reader up. It is a tight, well-written, complex take on an issue that is integral to the American identity, and also has deep resonance for other cultures, including Australia’s. The questions it raises are about more than just the African-American experience – they also touch on modern slavery, and the Third-World indentured labour and sweat-shops that are endemic to the global clothing industry:

Of course it would be shocking if all those Iowans and Idahoans found out that the cheap T-shirts they’ve been buying have blood on them … [but it’s] pretty cheap, wherever it’s coming from. It’s pretty cheap, and it’s pretty good. Nothing would change. People shaking their heads, shrugging their shoulders, slaves suffering somewhere far away, the earth turning around the sun.

One of the strongest themes in the book is the question of compromise. In a political sense, compromise is often seen as a political strength, a pragmatic way to bring people a little closer together. But the reason slavery managed to exist in Winters’s alternative history is because of compromise agreements in Congress. They took into account the concerns of the white northerners and the white southerners but not, pointedly, of any African-Americans.

So compromise became appeasement, and once put into law, left no way out for those without political capital – the slaves.

When a policy is fundamentally unfair, compromise cannot make it better.

And that is something to ponder as we face our own alternative reality: the wave of callous politics rising up across the globe.