(Excerpt from the story in Snapshots of Sri Lanka)

THIS was a first. Of all the places I’d travelled either by myself or with the family, I’d never hired a driver. I’d always believed that using local public transport was the best way to meet people and immerse yourself in the daily life of a country. 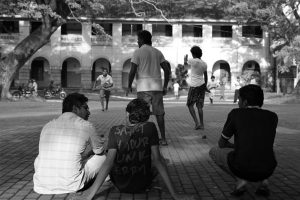 Cricket in the streets of Galle. Image by Jack Maher

I had the expectation that being driven from place to place would isolate us and diminish the experience. I was wrong. We had a rich experience – and in large part that was due to the fact our driver, Nirmal, was gregarious, knowledgeable and keenly interested in cricket.

We started our two week trip from Negombo. Nirmal loaded our family of four into his minivan – Lynda, me and our two teenage boys, Jack and David. As he did at the beginning of each day, he said a quick Buddhist prayer over the steering wheel, and moved slowly into the stream of traffic.

Our first stop was Sigiriya, famed for its towering Rock: home to an ancient monastery and an astounding, precipitous palace built in the fifth century.

Sigiriya is 150 kilometres from Negombo. In Australian parlance: one-and-a-half hours. Think again. Although a main road connects the two centres, we were lucky to get into fourth gear and rarely exceeded 30 kph. The narrow roads were cluttered with tuk-tuks, buses, trucks, cars, motorbikes balancing whole families and pushbikes often carrying more than one person. All the vehicles vied for the narrow space of a single lane. There was no sitting patiently behind other cars: the traffic was in a constant state of flux as the faster vehicles jostled to get ahead.

At first it seemed there were no rules, as horns blasted every second and the centre line was treated with disdain. But slowly, I began to see the logic behind the chaos. It would be impossible to wait behind every tuk-tuk and overladen motorbike, so you have to overtake. A horn blast would alert the driver in front of your intention, and they will shift infinitesimally to the left. If you cross the white line, oncoming cars will (probably) slow down so you can scoot around the slower vehicles.

But it required a feat of concentration that made a five-hour trip seem like twenty. And that was just from the passenger seat. Each year, nearly 60,000 road accidents are reported in Sri Lanka. I begin to understand why Nirmal blesses the steering wheel before taking off; and I thanked my own God I didn’t follow through with the briefly held notion of hiring a car and driving myself.

After a while I also realised that Nirmal, as an experienced professional driver, was actually much safer than most others on the road. Slowly, I came to feel comfortable in the front seat.

We quickly grew to like Nirmal. He said Australians have a reputation for being friendly; he himself was friendly, funny and relatively young (when asked to guess his age I said 25, but I was out by a decade).

We ate together most of the time, drank tea in the afternoon and beer at night, and swam together at the gentler of the Sri Lankan beaches. Like many Sri Lankans, he is KFC (keen for cricket), and he developed a bond with our equally cricket-mad 16 year old, David. And because we arrived in the country just as Sri Lanka started hosting the Twenty20 World Cup, there was plenty of cricket to discuss.

At Sigiriya, we discovered another benefit of having a driver. Nirmal knew everyone. But unlike the dodgy friends and cousins you dread being dumped with, his contacts were A-grade. He introduced us to Alek who gave us good advice about the Sigiriya touts: including the tip not to let them help you up the 1202 steps to the top of the rock. They might seem like they’re being polite and helpful, but it’s just a ruse to get cash at the summit.

It was advice well received, and on our way back down we passed a middle-aged English couple escorted by seven touts, some with only a finger touching their backs to validate their claim for money. The couple obviously didn’t need any help, and looked very uncomfortable but unable to escape their predicament.

After Sigiriya we spent two nights at the spectacular Bawa-designed Heritance Kandalama, and then moved deeper into the mountains, heading towards the romantic hill village of Ella. Around the British inspired town of Nuwara Eliya, the road started to deteriorate, turning into a narrow track skirting precipitous drops into deep gorges.

“A bus went down there last month,” said Nirmal. “Thirty-five people died.” None of us wanted the front seat on that section of road.

Drivers are normally given accommodation at the hotels where you’re staying, and except for the Galle Face Hotel in Colombo, Nirmal stayed at every hotel we did. But at Ella we stayed at a homestay and there was no room. Fortunately, he had a friend who ran the funky Nescoffeshop in the main road, and he stayed with him. Although its name makes it sound like the perfect place for an instant coffee, the Nescoffeshop actually has outstanding local meals comprising multiple curries, sambals, chutneys and vegetable specialties laid out like a feast, followed by local buffalo curd and treacle.

Along with many of the villagers, we wandered along the train tracks in the mist – a very atmospheric walk, punctuated by the occasional fear a train would skittle us.

Then the long-awaited rains came and we dashed back to the Zion View Homestay. While Lynda had an ayurvedic spa treatment in town, the four males sheltered in the homestay at the top of the hill, watching the sheets of rain climb the long green valley. We drank tea and Nirmal taught us how to play oombi – a simple but addictive Sri Lankan card game.

David longed to get in amongst it. Finally he coaxed Nirmal to accompany him out onto the square, and the two of them hung around behind one of the keepers, watching and getting closer until they were finally invited to play. Nirmal was offered a bat and he struck a few nice on-drives before handing it over to David, who played a neat drive to the off. No-one chased the ball; they just watched it limp off the square onto the deserted road. Malek, one of the players, waved his arms about and pointed, explaining the rules. There was no driving on the off side. There was no cutting and no pulling behind square. There was only one acceptable shot – smashing it to long-on for six. This was their one holiday of the month. No one was wasting time with delicate shots. After all – Sri Lanka was hosting the Twenty20 World Cup!

We had tickets for a Twenty20 double-header with Australia and South Africa first up, followed by India and Pakistan. We bought four tickets on the internet months before (for a ridiculous seven dollars each), but at that stage didn’t know we’d have a driver – and certainly not one who was KFC.

So we got to Premadasa Stadium early to try and pick up an extra ticket. We navigated the several levels of security – largely thanks to Nirmal’s translations – and made our way to the small, hot shipping container that passed for a box office. We discovered it was a sell-out, but we were in luck: there was one sad, lonesome ticket left – an obstructed seat right behind a pole. We took it.

Inside the stadium, we found plenty of empty seats. The day had been sold out on the back of the subcontinental grudge match between India and Pakistan. For the earlier match, seats were still vacant.

Despite the extremely officious ground stewards trying to keep Nirmal in his seat behind a pillar, we managed to use a little guile and some good timing to sneak him into a seat next to us, putting him in an Australian cap as a disguise. He looked a little uncomfortable in the green and gold, but he enjoyed the match which Australia eventually won thanks to the well-received slogs over long-on by Shane Watson.

The next day was our last in Sri Lanka, and twice more Nirmal’s contacts came in handy. First, he took us to the best shop in Colombo to get ten dollar linen shirts. Also, we wanted a couple of cricket bats which were certain to be cheaper on the subcontinent, since that’s where most of them are made. We’d heard of the famous Cricket Shop in Colombo, but he had a friend who ran a wholesale business called Royal Sports, where they import bats direct from Pakistan. We picked up a couple of grade two English willow bats for a touch over a hundred dollars – about a quarter of the price they’d fetch in Australia.

That evening Nirmal took us to the airport and it was a surprisingly sad farewell: all of us were a bit choked up. We’d spent so much time with him and shared so many experiences it was hard to think of waking up in the morning and not seeing him.

We gave him a few presents including an Australian cricket cap. He loves the Sri Lankan team, so it’s hard to imagine him wearing it very often. But maybe when Australia is playing against a neutral country, he’ll put it on and barrack for the green and gold.