Boy Swallows Universe is a first novel rich in adventure, description and plot. 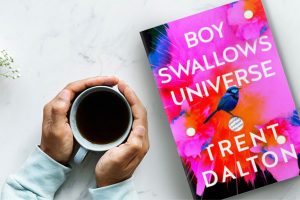 Mark Twain famously said that truth is stranger than fiction, and the parts of Boy Swallows Universe that draw on Trent Dalton’s actual boyhood are as intriguing as the fictional plot involving drug czars, prison break-ins and prescient siblings.

The novel is seen through the 13-year-old eyes of Dalton’s alter ego, Eli Bell, as he navigates his way through Brisbane’s squalid 1980s housing commission suburbs, peopled by hardened criminals, junkies, Vietnamese gangs, and drug lords masquerading as bastions of society.

The earth-bound, kitchen-sink wretchedness, tinged with hope and love, is a solid, confident foundation for the novel. This is overlayed by a more extravagant plotline that adds thrills and mystery, from daring escapes and street-gang battles to the surreal messages heard on the red telephone buried under Eli’s house. As strange as it sounds, when he was a boy living with dealers, Dalton did actually discover a telephone buried in a secret room under his house – although it did not connect to a mystical voice offering him advice.

Dalton’s day job is as a long-form journalist for the Australian, a role that has enabled him to come close to fascinating characters like Ivan Milat’s brother Alex, Anthony ‘Hannibal Lecter’ Hopkins and the Dalai Lama, and to develop a technique that captivates the reader through finely drawn detail.

This experience is evident in Boy Swallows Universe as Eli learns the importance of detail, first when penning letters to an incarcerated criminal, and later as he starts his journalistic career.

The character who first convinces Eli to focus on detail is Slim Halliday, a convicted killer who babysits Eli and his brother August while his mother and her boyfriend Lyle are off selling heroin. During Slim’s time in the notorious Boggo Road prison, he had come to value the power of description, relishing the vivid glimpses of the outside world put to paper by his former cellmate Lyle. He convinces Eli to pass on the favour by writing to a lonely inmate:

‘Don’t forget to be specific,’ Slim always says. ‘Details. Put in all the details. The boys appreciate all that detailed daily life shit they don’t get any more. If you’ve got a teacher you’re hot for, tell ‘em what her hair looks like, what her legs look like, what she eats for lunch. If she’s teaching geometry, tell ‘em how she draws a bloody triangle on the blackboard. If you went down the shop for a bag of sweets yesterday, did you ride your pushy, did you go by foot, did you see a rainbow along the way? Did you buy gobstoppers or caramels? …You catchin’ my drift? Details.’

Eli takes Slim’s advice, and so does Dalton, as can be seen from his description of Slim himself:

Slim wears a thin bronze-coloured button-up cotton shirt tucked into dark blue shorts. He wears these shorts constantly and he says he rotates between three pairs of the same shorts but every day I see the same hole in the bottom right-hand corner of his rear pocket. His blue rubber thongs are normally moulded to his old and callused feet, dirt-caked and sweat-stunk …

Dalton blends the real people from his childhood into closely related characters: his heartbroken, drunken father; an amalgam of his real brothers into the voluntarily mute savant August; his surrogate father, the small-time drug dealer Lyle; and most of all, his beautiful, troubled mother, Frankie:

Her summer dress is frayed and stretched. She stands barefoot by the train station phone box. August and I wait for her smile because her smile is the sun and the sky and it makes us warm. We smile at her as we rush closer to the phone booth. She has nothing. No bags. No shoes. No purse. But she will still have her smile, that brief celestial event, when her lips open from right to left and she curls her upper lip and she tells us in that smile that we’re not crazy, we are correct about everything, and it’s just the universe that is wrong. And she sees us and she beams that smile and it turns out the universe is right and it’s the smile that’s wrong because Mum is missing her two front teeth.

The adventure-rich plot lets Dalton explore Eli’s relationship with his family – for example, turning a longing for his lost, broken and often absent mother into a quest to break into prison to comfort her on Christmas Day.

As the adventure plot takes off, Eli’s life goes from dysfunctional to treacherous. He becomes involved with schoolyard thug Darren Dang, whose mother is ‘Back Off’ Bich, owner of Darra’s supermarket, restaurant and hair salon – and also bulk importer of heroin from Vietnam. She in turn sells to local gangster Tytus Broz – an ageing prosthetic limb manufacturer who controls the local trade in narcotics, and is protected by sinister strongman Iwan Krol, suspected of dismembering several of Broz’s business rivals.

Broz is also Lyle and Frankie’s boss, and when a deal goes awry Lyle is dragged away and Frankie gets stitched up for the mess. Eli doesn’t escape unharmed either, losing a finger – not just any finger, his ‘lucky finger’ – to the maniacal Krol at the behest of Broz.

When the dust settles, Eli and August find themselves in the drunken mayhem of their father’s housing commission bungalow while Frankie is sent to languish in Boggo Road. Eli must save his mother, find Lyle, get the family a home in a secure middle-class suburb and seek revenge on Broz. Together, they present a tall order for the young boy. On top of all that is his ambition to become a writer and his desire to forge a relationship with the young journalist Caitlyn Spies, a development that leads to a climactic encounter with Broz and Kroll.

While the adventurous plot is entertaining, the novel’s strengths come from the more personal elements. Eli’s voice is strong and Dalton’s description is evocative with Polaroid-sharp vignettes: from Eli playing Frankie’s favourite song under the door while she’s going cold turkey, to fishing off the Hornibrook Bridge in the rain with a coughing, dying Slim.

Strongest of all is the palpable sense of place, and all three qualities can be seen in his description of Darra:

Slim coughs, chokes up brown tobacco spit that he missiles out the driver’s window to our sun-baked and potholed bitumen street running past fourteen low-set sprawling fibro houses, ours and everybody else’s in shades of cream, aquamarine and sky blue. Sandakan Street, Darra, my little suburb of Polish and Vietnamese refugees and Bad Old Days refugees like Mum and August and me, exiled here for the past eight years, hiding out far from the rest of the world, marooned survivors of the great ship hauling Australia’s lower-class shitheap, separated from America and Europe and Jane Seymour by oceans and a darn pretty Great Barrier Reef and another 7000 kilometres of Queensland coastline and then an overpass taking cars to Brisbane city, and separated a bit more still by the nearby Queensland Cement and Lime Company factory that blows cement powder across Darra on windy days and covers our rambling home’s sky-blue fibro walls with dust that August and I have to hose off before the rain comes and sets the dust to cement, leaving hard grey veins of misery across the house front and the large window that Lyle throws his cigarette butts out of and I throw my apple cores out of, always following Lyle’s lead because, and maybe I’m too young to know better, Lyle’s always got a lead worth following.

At nearly 500 pages this is a long work for a first novel, but with the twists and turns, the multitude of interesting characters, the emotional family journey and Dalton’s eye for detail, the book seems much shorter, and is quickly swallowed up.