Mutawintji – giving back the promised land

According to Dreamtime legend, Mutawintji is the promised land, delivered to the survivors of a god’s dreadful wrath. 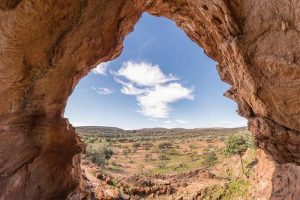 The Malyankapa tribe made the serious error of taking advice from a mischievous frog – advice which led them to break a major taboo and incur the anger of the god Kuluwirru.

He was so incensed that he tormented them for several years, sending down plague, fire and famine, before turning just about all of them to stone.

But finally his anger eased, and a lucky few were led to the cool oasis of Mutawintji, which means ‘place of green grass and waterholes’, and were made its custodians.

For the next 15,000 years, people came to this refuge from all over the country, carrying goods for trading, ochres for painting and bearing the spirit of celebration.

As they arrived, they set up camps. Those tribes who lived closest to Mutawintji camped nearest the centre – other tribes radiated outward like a human map of Australia.

There was dancing, story telling and feasting. And (as still happens in some modern Australian parties) the men would separate from the women. Then each group would go to a designated area to draw, etch and carve the artworks that make this place famous around the world.

They would try out their new ochres traded by travellers from as far away as the Flinders Ranges, and would test out new implements brought by the eastern tribes. After white man arrived, goods such as metal axes were also traded, and these can be seen stencilled on the walls of the caves, next to the original rock variety.

White people started moving into western New South Wales in the 1860s, and Mutawintji became a picnic-ground-cum-museum, where Europeans relaxed in the quiet of a park that claims a god-given tranquillity.

It became very popular, and in 1927 was officially made a reserve. Forty years later it was designated as a historic site, and in 1982 it became a fully fledged national park called Mootwingee.

But the local tribes (grouped under the umbrella name Mutawintji) were becoming increasingly disturbed about damage to the park, in particular to the historic sites and artworks.

Instances of vandalism and theft were increasing (in fact, vandalism by graffiti dates back as far as 1898), and in 1983 the Mutawintji people decided do something about it. The elders organised a blockade to raise their concerns and to seek the return of the land.

After four years of negotiations, the park was reopened with restricted access to the sacred sites.

By 1992 many aspects of the park were being run in conjunction with the local Aboriginal people, and in December 1996 the Aboriginal Ownership amendment to the National Parks and Wildlife Act was passed, paving the way for national parks to be returned to their Aboriginal owners.

Last September, Mutawintji became the first national park in New South Wales to find its way back into traditional hands.

It is now run in conjunction with the Mutawintji Land Council and NSW National Parks. The State government holds a 30-year lease, and the management board contains a majority of traditional owners. The day-to-day running of the park is handled by the local people according to NPWS guidelines.

Now, Mutawintji is seen as a place for both blacks and whites to learn how the people lived here over the past 15 millennia. There are a number of educational activities, such as the bush tucker tour and the historic site tour, but the galleries are the main attraction.

The men’s gallery contains etchings of hunting stories. They had been carefully picked out using implements which were sometimes brought from afar, but were more often made in a special tool ‘workshop’ away from the gallery site.

While the men were busy etching, the women were stencilling using both local and ‘imported’ ochres. Some later stencils are even made using gypsum traded from the Europeans.

There are plenty of signs to read in the stencil gallery if you know what to look for. For example, two holes carved in one of the overhangs points to a waterhole on the hill where passing tribes can get a drink.

The only man allowed to stencil in this gallery is the clever man – and at one place he has put his handprint like a seal over three yellow circles. This indicates that a particular waterhole is sacred for ceremonial purposes only.

Tourists from all over the world come to appreciate the artwork and historical significance of Mutawintji, and under the watchful eye of the local people, everyone is happy.

In March this year, the Carr government signed an agreement recognising Aboriginal rights across many of the State’s national parks.

Based on the success of Mutawintji, that agreement may well see more promised land returning to the original custodians’ hands.