These new stories from award-winning author Ted Chiang challenge what we think about artificial intelligence, free will and other big questions.

Ted Chiang made quite an impact in 2002 with his debut collection, Stories of Your Life and Others. The title story won a Nebula Award and a Theodore Sturgeon Memorial Award, and was adapted into the 2016 Denis Villeneuve film Arrival. The most compelling aspect of that story was the idea that time itself could be intertwined in a language.

His long awaited second collection, Exhalation, is also rich with philosophical ideas that take the foreground, while his unadorned prose sets the scene cleanly and simply, not cluttering his speculation with too much character or plot. That’s not to say you don’t feel for characters, but it is not the primary concern. His real strength is the exploration of fundamental questions of existence. 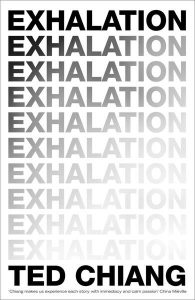 Those questions include pondering the existence of God, self, fate and free will. He also delves into long-held science fiction conundrums surrounding artificial intelligence and time travel.

Chiang is adept at creating scenarios where our world is flipped, revealing a hole in the new creation, and at the same time, one in ours. And through these new worlds he questions many things we take for granted.

Six of these stories have been published before, but three are new, including one of his best examples of tipping the world upside down, ‘Omphalos’.

This story is set in an alternate Earth where creationism is supported by scientific evidence:

… our unbroken record of growth rings became five thousand years long, then seven thousand years… But even that thrill can’t compare with that inspired by examining samples of wood a few centuries older. Because in those tree trunks, there’s a point at which the growth rings stop. Counting back from present, the oldest growth ring was formed eight thousand nine hundred and twelve years ago… the year you created the world, Lord.

Exactly 8912 years ago, all evidence of growth disappears. Fossilised shells show no growth marks at their centre, as if they were formed in one piece, fully whole. Most convincing of all: primordial human skulls without sutures, their fossilised bodies without navels.

In this universe, scientists have stopped looking at the stars, because they are finite in number and there is nothing new to learn about them. However, the protagonist learns of an astronomical discovery that proves the Earth is not the centre of the universe, putting in doubt everything she believes. The story’s title comes from the ancient Greek word for navel, which was also the name of a stone artefact residing in Delphi, which the Greeks believed was the centre of the world.

This brings in one of the recurring themes in this collection – tying the ancient world to an alternate universe to offer insight into our current existence. This is also evident in the first story, the Scheherazade-like nested tale ‘The Merchant and the Alchemist’s Gate’, in which a merchant travels through a portal to his past to try and redress something that has caused him distress his whole life. But while changing the past proves impossible, he learns something that changes his present:

Nothing erases the past. There is repentance, there is atonement, and there is forgiveness. That is all, but that is enough.

Chiang set this story in the Muslim world because, he says, the acceptance of fate is one of the basic articles of faith in Islam.

Another story that combines new and old, this time in parallel narratives, is ‘Truth of Fact, Truth of Feeling’. The idea that technology has changed human memory is explored in two narratives, one set in an island community encountering writing for the first time, the second in a future where every instant of your life is recorded in an internal device and can be replayed instantly to verify facts. In investigating the nature of truth and the role of technology in validating and disseminating it, the protagonists discover conflicting truths themselves: fluid memory better suits harmonious relations, but hard facts can create a more honest world.

The title story ‘Exhalation’ also has links to the past, in particular the early days of anatomy and surgery, and the age of biological exploration. Only this time, the surgeon is made from metal, and he is surgically investigating the workings of his own mechanical brain, in the process discovering something pertinent about the inevitable conclusion of life on his world.

Another theme Chiang explores is that of parenting, as in ‘Dacey’s Patent Automated Nanny’, a story inspired by an early 20th-century automated crib. Perhaps the most interesting parenting story, though, is the novella The Lifecycle of Software Objects, in which a scientist attempts to rear a digient, an artificial intelligence that exists in a digital world, but can also enter the real world by inhabiting a specialised suit. The digient takes the scientist on a tumultuous path many parents would be familiar with, traversing the problems of morality, free will, companionship, work, and eventually sex.

Chiang describes a believable journey that questions just how different human intelligence is to what may come in the future – a fully developed, complex, intensively reared artificial intelligence.

Other stories include ‘Anxiety is the Dizziness of Freedom’, in which a quantum device enables you to converse with a version of yourself in an alternate universe, raising the question of what your life would be like if you had made different decisions – and if you could ever tell which one would work out best.

Perhaps the most interesting story is also the shortest, at barely four pages. ‘What’s Expected of Us’ again involves a technological device, a predictor which sends a signal back in time:

Its only features are a button and a big green light. Specifically, the light flashes one second before you press the button.

Try as you might, you cannot beat the machine. It always flashes before you press the button. At first people treat it as a game, until the significance hits home. Their actions are predetermined; they have no fundamental control over their lives. And with that realisation, they lose their will to live.

But the narrator has a solution:

Pretend you have free will. It’s essential that you behave as if your decisions matter, even though you know they don’t. Civilisation depends on this self-deception. Perhaps it always has.