TRENT DALTON All Our Shimmering Skies

Following the resounding acclaim for his debut novel, Trent Dalton has drawn together some of the elements that made Boy Swallows Universe such a success and remixed them into a gritty fable that bristles with tantalising optimism.

The heart of his first book was Dalton’s 13-year-old alter ego, Eli Bell, and his love for his beautiful, broken mother.

In All Our Shimmering Skies the protagonist is Molly Hook, a 12-year-old girl clawing out an almost Cinderella-like existence as a gravedigger in 1942 Darwin, under the dubious care of her alcoholic father and abusive uncle. She too loves her mother, Violet, a broken woman, cursed like all her kin by Longcoat Bob, a semi-mythical Indigenous elder whose gold was stolen by her grandfather.

It’s harder to imagine a rougher life for this gravedigger girl. She digs barefoot, lives among the dead, helps steal from corpses, and suffers regular beatings from her uncle Aubrey, who despises her for a hidden reason. On top of everything else, she bears the burden of the family curse. 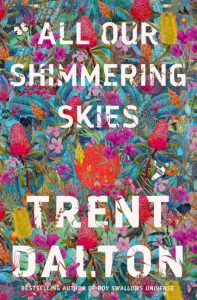 TRENT DALTON All Our Shimmering Skies

She forms a bond with her uncle’s girlfriend, the failed actress Greta, who thinks the curse is rubbish.

‘Oh, of course, I forgot,’ Greta says. ‘The great curse of Longcoat Bob’s gold! You still getting worked up by all that hocus-pocus, Molly Hook?’

‘Don’t you wonder about all the bad things that have happened to my family?’ Molly asks.

‘Hate to break it to you, Molly, but bad things sometimes happen around bad people. That’s a fact of life. Got nuthin’ to do with blackfeller magic.’

As with the first book, All Our Shimmering Skies is most believable when entrenched in the miserable world of addiction, crime and fear: a childhood, like Eli’s, based on Dalton’s own experience growing up in a dysfunctional, impoverished family.

Dalton describes 1940s Darwin, like the 1980s Darra of his first book, in all its dirty detail:

The Darwin dream has a smell and it smells like the maggots eating all those discarded crab claws. It smells like all the cut ends of vegetables left to rot in the Chinatown bins that dingoes and lost dogs tip over after dark. Darwin dreams in drink and sweat. Warm beer and toil. Fat-bellied fist fighters and men who piss in buckets beneath their bar stools. Empty car bodies left abandoned in the streets outside town by empty men who shot themselves dead inside them.

Molly follows Violet’s advice to read voraciously. Like Eli, that leads to a life rich in words, even to her helping grieving families construct epitaphs for their loved ones. And also like Eli, she has a heart – but a heart she tries to keep hard as stone, again on her mother’s advice, to enable her to survive the travails of her rough life. Later, in one of the many fabulist moments, the metaphor takes physical shape when Molly discovers her mother’s actual rock-hard heart.

The bad things keep coming for Molly. First her mother’s suicide, then her uncle tries to kill her. She calls to the sky for help – and the sky delivers, in the form of Japanese bombs falling on Darwin.

In the aftermath of the attack, Molly and Greta escape Aubrey and set off to find Longcoat Bob, the gold, and the answer to the curse. This sojourn is part Homeric and part Wizard of Oz. Once they start out on the road to the gold, colour illuminates every scene, as if shifting from bleak, monochromatic Kansas to technicolour Oz.

The colour and wonder here are supplied by the amazing landscape south of Darwin – inspired by Litchfield National Park – where crystal waterfalls form curtains and flowers and butterflies burst out in a vibrant explosion of life; where a city of rock formations creates an impenetrable maze, sheltering eternal secrets.

They are joined by Yukio, a Japanese pilot who literally falls from the sky. He is one of the several gifts the sky bestows on Molly, including a treasure map etched on her grandfather’s fossicking pan, the bombs that free her from her uncle, and even a baby dropped by an eagle.

It is especially through Yukio that we experience the magical beauty of the landscape:

Seen from the orange-red sky above and looking down and closer in and closer in, they are there, wanderers crossing a vivid floodplain cut by sinuous rivers and wide freshwater channels dotted with lily-fringed waterholes.

The sun low and honeyed. The man in the Japanese military uniform at the back of the group, stopping every so often in his tracks to breathe the wild floodplain deep inside him, to take in the vision of all this wild green life. By the edge of a clearwater billabong he pauses briefly to smell a floating vine flower, the kangkong, with its white and pink flowers shaped like trumpets. The intoxicating scent and the depth of the pink colour that deepens and darkens inside the flower’s wide throat. It makes him laugh.

‘What’s he laughing at?’ Molly asks.

Yukio turns full circle on his feet, taking in his setting. He raises his palms to the sky, smiling.

The skies are central to the story, as the title suggests. Molly talks to both the day sky and the night sky – and they answer back. The night sky tells no lies – just the cold hard truth, unwelcome but necessary. The day sky, however, says what you want to hear, and can lead you in the wrong direction. The day sky hides the dark truth, the night sky tells Molly. It is an illusion. The blue is just a reflection, it presents a universe that is bright and sunny, when in fact, it is dark and endless.

But do the skies really have answers, or do they merely echo what we already know?

With this book Dalton moves closer to establishing his own style: gritty to the verge of horror, so rich in allusion it resembles fable. And at its core, young protagonists bursting with an optimism that propels them towards a better life, taking the reader with them.

While not as wholly engaging as his debut, it definitely avoids the dreaded second novel syndrome, and readers who enjoyed his first book are highly likely to also enjoy this one.