AC GRAYLING The Frontiers of Knowledge

AC Grayling ranges across multiple disciplines as he presents the case for a broader understanding of the world.

At this year’s Sydney Writers Festival, renowned philosopher and author AC Grayling implored the audience to become multi-literate, that is to read widely across different subject areas, to inoculate us against the preponderance of dubious information that besets the citizens of the 21st century.

Grayling argues that one of the problems with our current inability to process so much information is the change in higher education from being initially a generalist learning experience leading on to specialisation, to having specialisation as its goal. In doing so, we have lost our ability to connect disparate elements – and are in effect replacing education with training.

To overcome this, he believes we should read introductory texts in a variety of disciplines, so our understanding is based on verified facts, and we can engage in fruitful discussions on those topics. 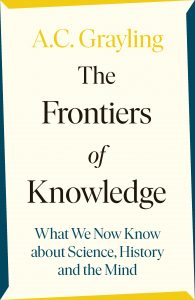 AC Grayling The Frontiers of Knowledge

If that sounds a daunting tax on our time and mental energy, then he has in part supplied a gateway in The Frontiers of Knowledge. A famed polymath, Grayling delves into three key areas of knowledge that can help us understand who we are, where we are, and how we came to be here.

The detailed introduction plots out his arguments and highlights the 12 problems that beset enquiry.

These include the Pinhole Problem, by which we attempt to understand something from our limited perspective; the Truth Problem, questioning the validity of certainty; the Ptolemy Problem, named after Ptolemy’s geocentric model of the universe that ‘worked’ in terms of navigation and predicting eclipses, yet was still wrong; the Hammer Problem, reminding us that if your only tool is a hammer, everything looks like a nail; the Lamplight Problem, whereby you search for your lost keys under the lamp, because it’s the only place you can see; and the Meddler Problem, which asks if and how observing something can actually influence it.

The subtitle of the book is What we now know about science, history and the mind, and it deals not just with what we know, but the ignorance this knowledge has uncovered. In effect, what we didn’t know we didn’t know:

Humankind has passed from the certainties of faith to the uncertainties of knowledge, from faith to ignorance via knowledge – a new knowledge-filled ignorance, a surprising and paradoxical state of affairs because so much has been learned, and so much mastery acquired as a result of the great quest for knowledge – and yet, like climbers on a mountain, the higher we go the further away we see that our ignorance stretches; we see that the frontiers of knowledge themselves lie unmappably beyond the horizon.

This endless horizon of ignorance could seem depressing, but in Grayling’s skilled hands we are led along the human journey of understanding that, despite its inadequacies, is clearly an astounding achievement.

The defeasibility of science – that things can be determined to a very high degree but are never certain – also could be frightening, leaving us floating in a world without the comfort of certainty. But Grayling’s explanation makes it reassuring:

Science is arguably humanity’s greatest intellectual achievement; the scientific method is the paradigm of responsible, careful, scrupulous investigation into its various subject-matters, and it is acutely self-critical and controlled by the empirical data of experiment – which is to say, by the way the world is and not by how we wish it to be … scientists do not claim to know, but they do ensure that their theories are secured to the utmost degree by rigorous testing and evaluation.

He cites the example of high-energy physics experiments, which must meet a 5-sigma degree of confidence – that is, with only a one in 3.5 million chance of error – before they are considered ‘discoveries’.

He starts the journey toward science with the beginnings of human technology.

Technology is about getting things done, whatever the explanation. The philosophical nature of the French is summarized in a witticism attributing the contrary view to them. ‘It works in practice, but does it work in theory?’

The journey towards science commences 3.3 million years ago with hominids literally banging rocks together, through the ancient philosophers, all the way to the discovery of the telescope and the enquiry that led us to question not only our place in the world, but the world’s place in the universe.

The inquisitive use of the telescope disrupted the existing worldview, setting science and religion at violent loggerheads (a situation we are unfortunately still witnessing today).

It is interesting that Grayling describes religion as proto-science – at least our ancestors were trying to understand why things were happening rather than just dealing with the consequences. In that nascent state, however, they were keen to assign agency to the forces that acted on their world.

… we must see such observations as prayer, ritual, and sacrifice as efforts to engage with these forces and influence them – which is precisely what any piece of technology does, whether it is a shaduf for irrigating crops, a steam engine, or an airplane.

However, religion has one benefit over science – absolute certainty, resulting too often in violence.

It was thought if I am right and you are wrong, especially about the greatest questions concerning reality and the safety of our souls, your wrongness is dangerous, and has to be dealt with. But if we are all paddling the boat of enquiry together in an ocean of ignorance, our perspective changes – for the better.

This broad work delves into important subjects that are often left to specialists to explain, but it does so without going into the minutiae. In that respect it is a little like a tasting plate, encouraging you to come back for a fuller meal of an area that piques your interest.

These areas include investigations into human history and development, the workings of our minds, what we know about the universe – and the role of science in furthering our knowledge.

One topic is a history of physics, including detailed explanations of subatomic particles such as quarks and bosons, as well as a discussion of the merits and otherwise of string theory. While all this may seem indecipherably complex for the lay person, Grayling patiently leads us through the levels of understanding from the ancient atomists to current theory. It is complex, but he thins the material with explanation so it does not bog down as some dense texts can, and while it may require re-reading to fully comprehend it, it is rewarding once it all comes together.

And that is the joy of this book: you can come to understand concepts you may have previously considered too difficult; but you wouldn’t want to sit down and try to devour it in one session. First, because while it is written in a clear, logical style and is very easy to read, some topics are quite complex and require close reading.

Second, because these ideas are worthy of being savoured, rather than rushed over. A single morning’s read can provide food for thought for the entire day – while helping prepare us for the onslaught of information, and misinformation, that daily assails us.